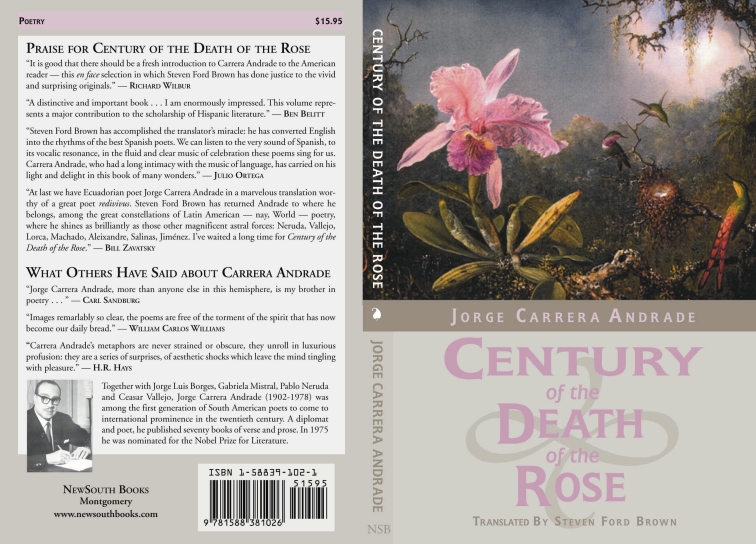 Century of The Death of The Rose: The Selected Poems of Jorge Carrera Andrade, 1926–1976, edited and translated  by Steven Ford Brown, NewSouth Books, 2002

Century of The Death of The Rose now in second printing.

A distinctive and important book. I am enormously impressed. This volume represents a major contribution to the scholarship of Hispanic literature.

Steven Ford Brown has accomplished the translator’s miracle: he has converted English into the rhythms of the best Spanish poets. We can listen to the very sound of Spanish, to its vocalic resonance, in the fluid and clear music of celebration these poems sing for us. Carrera Andrade, who had a long intimacy with the music of language, has carried on his light and delight in this book of many wonders.

Jorge Carrera Andrade, more than anyone else in this hemisphere…is my brother in poetry.

Images remarkably so clear the poems are free of the torment of the spirit that has now become our daily bread.

It is good that there should be a fresh introduction to Carrera Andrade to the American reader -this en face selection in which Steven Ford Brown has done justice to the vivid and surprising originals.

From The Harvard Review

Brown’s translation is a strong one, and he has done a superior job in capturing in English the music of the Spanish. Influenced as he was by the surrealism, cubism, and futurism of the avant-garde, Andrade never allowed his work to be dominated by any one movement, but rather constructed an independent style all his own. The subtle worldly elegance and universal compassion which characterize his best work secure Andrade’s position as a poet of both historical and contemporary importance, one from whom poetry itself and people in general can benefit now more than ever.

Reprinted from The Harvard Review with permission. Copyright ©2003 by the Trustees of Harvard College.

From the Preface by J. Enrique Ojeda

The first edition of Microgramas was published in Tokio* in 1940 when Jorge Carrera Andrade was posted to Yokohama, Japan, as the Ecuadorian Consul General. The book’s miniaturized format matched well with the diminutive dimensions of those fragile lyrical structures for which the poet invented the felicitous name of microgramas. Composed between 1922 and 1927, they were partially published in the editions Boletines de mar y tierra (1930) and Rol de la manzana (1934). Those “compressed” poems —as Carrera Andrade called them—found a collective and independent existence in the Microgramas volume, we now present in this new edition.

Of singular value is the introductory essay “Origin and Future of the Microgram” in which Carrera Andrade defines the micrograma by relating it to other forms of condensed poetry: epigrams, proverbs, ballads, etc. He refers to Góngora and Quevedo, Spanish poets of the baroque period, as well as to their compatriots of the twentieth century who also cultivated this genre. He then surveys the French and Latin American authors who wrote the same kind of brief poems. At last, he offers a short treatise on Japanese “haiku”. Both the micrograms and the introductory essay are of considerable importance —not- withstanding their simplicity— since they offer many clues towards a deeper understanding of the richness and complexity of Jorge Carrera Andrade’s poetry.

From Review in Alabama Writers Forum

In Micrograms, Carrera Andrade discovers for us a universe of poetic analogies and unexpected ways of looking at small things. Poetry becomes a powerful magnifying glass through which the eye’s reader is amazed by a microphysics of meanings. To sayit very simply: Carrera Andrade writes poetry at its best possible and compressed expression.

Unfortunately, as Brown has explained in his English edition of Carrera Andrade’s Century of the Death of the Rose, “since his death in 1978 Jorge Carrera Andrade has suffered a decline in his literary reputation in the United States.  Although he has become a forgotten poet among U.S. literary critics and anthologists, his reputation remains very high in France, Germany, Italy, and South America.” With this new bilingual edition of Micrograms, published by Orogenia Corporación Cultural in Quito, Ecuador, Ojeda and Brown not only have made available to the English-speaking world this important book of poetry, but also contributed to the “rediscovery” of Carrera Andrade, among Octavio Paz, Pablo Neruda, Gabriela Mistral, and Cesar Vallejo, as one of the finest contemporary poets of Latin America. He was nominated for the Nobel Prize for Literature in 1975.